A particularly insidious source of hidden carbs are items we use as flavorings or condiments. I would never have thought I needed to look for low carb onion soup mix. Somehow, if it’s not a major ingredient, I’m not always thinking about it being a significant player in the nutritional profile. I started thinking about it, though, as I happened to be working on a recipe for low carb meatloaf and wanted to include onion soup mix. To a basic cook like me, meatloaf and onion soup go together like low carb and bacon, man!

Well, have you actually stopped to look at the carbs in onion soup mix? Because some of them have upwards of 20 grams of carbs per packet! Some manufacturers also count packets as multiple servings. Not really what I’m going for. An onion soup mix is going to have some carbs, sure, because hey–onions! But why have so many more than necessary?

So I reviewed a whole bunch of different recipes for homemade onion soup mix to come up with my own. I mixed up a big batch and put in a small mason jar to keep with my spices so I’ll have it on hand for flavoring hamburger and Crock Pot meals. You could easily make less, though. I just like having plenty on hand when I need some. That kind of preparation makes it a lot easier for me to stay low carb. 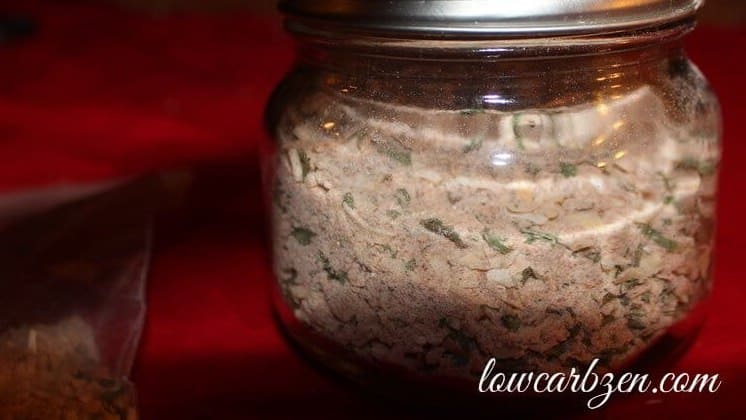 In my best estimation, 1 1/2 tablespoons = approximately 1 packet soup mix, roughly what's pictured above in the baggie and what I based serving size on. Please figure nutritionals based on the products YOU use, though. In particular, the beef bullion will make a difference in the carb count. 1 packet bullion = 1 cube. I choose the Sodium Free Bullion (even though it has some sugar in it, boo!) because I wanted more control over how much salt goes into the actual recipes. So many kinds of bullion are overwhelmingly salty! With the exception of the bullion and onion, most of the spices I included are optional, although commonly found in the soup mix replacement recipes I reviewed. The only spice I saw included in several recipes I don't have in the ingredients here is Turmeric, because I didn't have any on hand. Otherwise, I would have tossed some in there, too!
Nutrition Facts
Low Carb Homemade Onion Soup Mix
Amount Per Serving (1 g)
Calories 34
% Daily Value*
Cholesterol 6mg2%
Sodium 2mg0%
Carbohydrates 7g2%
Fiber 1g4%
Protein 2g4%
Net Carbs 6
* Percent Daily Values are based on a 2000 calorie diet.
Made this? Show it off!Follow @lowcarbzen & tag it #lczen.

Do you use onion soup mix in your cooking? Is it store-bought or homemade?