My mom makes the best pie crust in the world–sorry, Nanas everywhere! Mom’s crust flaked as you broke off a piece and literally melted in your mouth. She used to bake up extra clumps of her amazing crust whenever she made pie–and sometimes even when she wasn’t making pie–just so we could munch on it still-warm-from-the-oven, covered in melted butter and washed down with a little milk.

But there is a downside. Because of these beautiful memories, I’ve had a near impossible time being satisfied with each and every low carb pie crust I’ve tried. Almond flour crust certainly works, but it’s not going to stack up to Mom’s. No way, no how.

This is a problem for many people starting low carb. Not missing my Mom’s pie crust, obviously! But comparing low carb replacements to the “real deal.” You can adore cauliflower in it’s own right and you can doctor it up loads, but if you bite into some caulimash with the memory of mashed potatoes fixed firmly in your head, there’s an inevitable let-down coming.

So what are we to do? Getting some distance from the memories of the original flavors often help. Six months without mashed potatoes and caulimash is a much better stand-in. But for something as outstanding as my Mom’s pie crust, even many intervening years were not enough to fade the memory from my mind.

So I opted to get more creative and not try to pass off an imitation crust. Instead, I made a whole new kind of crust with crumbled Atkins bars. I can appreciate this new breed of crust on it’s own merits without comparing it to a high-carb counterpart it can never truly emulate. I’m making my own holiday taste!

Besides, is there anything better together  peanut butter and chocolate? That’s why I had to try out my new crust idea with a low carb peanut butter chocolate pie…you can pin it here. 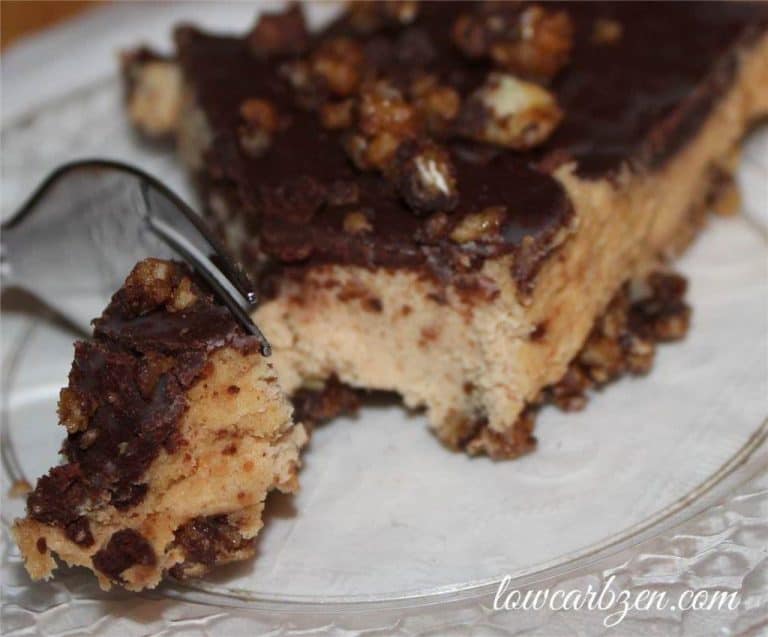 A very rich treat that can be made ahead and stored in the freezer so you don't need to feel left out. I hate to drag out my food processor, so I often double this just to make my efforts count.
Print It Rate It Pin It
Prep Time: 30 mins
Cook Time: 2 hrs
Total Time: 2 hrs 30 mins
Course: Dessert
Cuisine: American
Keyword: atkins bars, low carb crust, peanut butter
Servings: 8
Calories: 504kcal
Author: Dixie Vogel

On the Net Carbs: The Atkins bars I used have sugar alcohol; I choose them because they looked like they'd make the best crust from the options in my local supermarket. But for sugar alcohols besides erythritol, some subtract 1/2 of the gram total from the carb count instead of all of it to figure net carbs (here, adding 2 net carbs per piece). Check the ingredients of the bars you use, and figure your nutritional information according to your practices. Sweeteners: I used erythritol with both liquid Stevia and liquid Sucralose to boost sweetness and balance out the cooling sensation of pure erythritol. Many times, sugar free sweeteners work best if you combine. Swerve would work great on it's own as well and I would have used that if I had some on hand. A butter knife slid under the crust helps get those pieces out of the pan, in case you're too impatient waiting for it to thaw more. Not that I would know anything about that...ha!
Nutrition Facts
Low Carb Peanut Butter Chocolate Pie
Amount Per Serving (1 g)
Calories 504 Calories from Fat 396
% Daily Value*
Fat 44g68%
Cholesterol 7mg2%
Sodium 361mg15%
Carbohydrates 12g4%
Fiber 5g20%
Protein 9g18%
Net Carbs 7
* Percent Daily Values are based on a 2000 calorie diet.
Made this? Show it off!Follow @lowcarbzen & tag it #lczen.

This is a bit much for an everyday sort of treat, but a Low Carb Peanut Butter Chocolate Pie is perfect for special occasions like the holidays (and has been well-received by the carb eaters, too). I hope you enjoy it! Let me know if you experiment with this one – hearing what y’all do to make recipes your own is one of my favorite parts of sharing recipes. I get so many great ideas from you guys!

And you Pinterest people may be interested in Atkin’s Holiday Taste Contest.  :) You make an low carb, Atkins holiday pinterest board and there are some very cool prizes. Mine’s here. I don’t need all that much excuse to hit up Pinterest anyway.

This post was sponsored by Atkins Nutritionals, Inc. All of the content and opinions are 100% my own, however. Because, I’m Dixie!