Plus you don’t need nearly as many peppers to make the stuffing part than to stuff them. So it’s easier, takes fewer peppers and I like it better. Win all the way around! This also reheats very well, maybe tasting better than when you first make it, and I haven’t tried freezing it yet, but I’m thinking it probably will freeze just fine. If you try it, mention it in the comments! 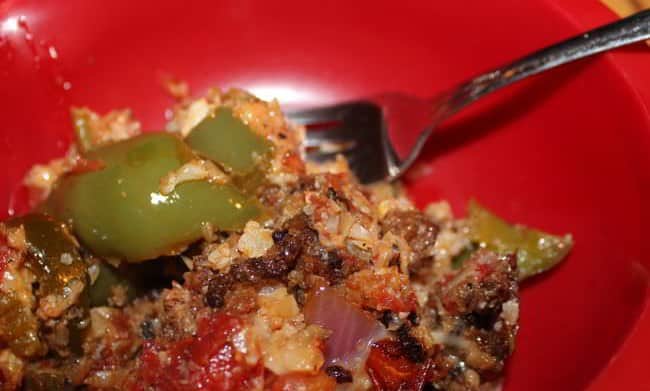 Make sure you drain the tomatoes well. Unlike traditional stuffed peppers using rice, caulirice dishes don't need that liquid I also cook my hamburger in beef broth base because I like the extra flavor oomph, but saw no reason to include it in the recipe. It's not really integral, just a personal preference. This batch was made with Pepper-Jack cheese, and tomatoes with green chilies (e.g. Rotel) to give it a little extra kick. But the recipe and nutritionals listed are for my regular version. So that's why the pictures are slightly different.
Nutrition Facts
Low Carb Stuffed Peppers Skillet Dinner
Amount Per Serving (1 cup)
Calories 269 Calories from Fat 180
% Daily Value*
Fat 20g31%
Cholesterol 6mg2%
Sodium 150mg6%
Carbohydrates 8g3%
Fiber 2g8%
Protein 14g28%
Net Carbs 6
* Percent Daily Values are based on a 2000 calorie diet.
Made this? Show it off!Follow @lowcarbzen & tag it #lczen.

Tip: I love the Steam Cooking Bags for quick cooking and the food processing attachment on my Juiceman Immersion blender, because together they are just the right size for making short work of whipping up caulirice from either a head of cauliflower or a 16 oz. bag.

Carbquik Review: Love it? And does it love you back?