I’ve been reading and reading about all the wonderful benefits of consuming bone broth. Seems like everybody and their brother is making some. The Atkins book, The New Atkins for a New You], suggests broth for avoiding some of the unpleasant side effects of  first transitioning to low carb. The folks I know who have tried it heartily recommend it, so I decided to give it a go!

What is bone broth?

Bone broth is the made from bones, plus maybe some meat and vegetables, cooked in water until it’s gradually reduced to a flavorful liquid. The broth is then strained. While stock is cooked maybe 4-12 hours, bone broth is cooked over a longer period than ordinary stock in order to more fully extract the nutritional content from the bones. Depending on the type of bones you are using, 24 – 72 hours may be appropriate. Basically, we’re looking at cooking the bones to the point that they are soft when pressed between the fingers, bordering on disintegration.

Why would I want to eat bone broth?

Bone broths are rich in nutrients, minerals and amino acids. Bone broth has the amino acids, proline and glycine. It has calcium, magnesium and potassium. Bone broth has proteins, collagen (which turns into gelatin), and glucosamine (like what’s sold in supplement form for joint pain). It’s good for inflammation, joint health, easy on the digestive system, cheap to make and utilizes ingredients you’d otherwise throw away. How awesome is that?

When I was ready to get started, I read 101 recipes to get as much info as a could. After seeing so many techniques and suggestions, I felt I had a good handle on the process. While some people use a large stock pot or even pressure cooker, I don’t have either and I was more comfortable leaving my slow cooker on for long periods than leaving the stove on overnight, anyway.

Step 1: Collect Bones! Although some people buy bones for their broth, I wanted to make use of what I had. People will suggest using the best quality bones possible (i.e. 100% organic, grass fed, etc.). While it makes sense to me the better quality ingredients you start with, the better the outcome will be I didn’t really sweat the particulars here. I figured I would start where I’m at and use bones from the meat I am already eating.

So I started a bag in the freezer and threw bones in it after meals–this batch was probably a couple of chicken’s worth, a steak or two and a turkey. Yum, Turkey!

I also threw leftover vegetables in a baggie in the freezer–celery that was past it’s prime, bits and pieces of onion that weren’t fresh enough to serve as is, the ends of zucchini from my zoodle-making, and some carrots I hadn’t used up. I’d recently made some fire cider, and had a mess of veggies and fruit from that operation as well, which I popped into the freezer until I was ready to make my broth. You can really use whatever you want, other than leafy greens like spinach and kale, because those become bitter if cooked over several hours.

Once you have your bones and veggies saved up, you’re ready to rumble! 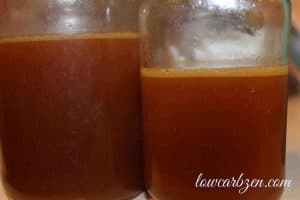 This tasty bone broth can be drank straight - great warmed up with a little butter - used to flavor meats for cooking, as the base in soups, or any other way you would use stock or bouillon. Ingredients besides the bones are merely suggestions to get you started.
Print It Rate It Pin It
Prep Time: 10 mins
Cook Time: 30 mins
Total Time: 40 mins
Course: Soup
Cuisine: American
Keyword: Bone Broth, Crock Pot Broth, Homemade Broth, Slow Cooker Broth
Servings: 1 Large Pot
Author: Dixie Vogel

Vegetable Suggestions (Added at the End)

For the bones: I used primarily turkey and chicken bones, with a couple of steak and ham bones tossed in for good measure. Evidently, chicken feet increase the gelling factor, which is a sign your broth has lots of collagen and is especially potent. I didn't have any chicken feet. Most of the recipes I saw used a tablespoon or two of Apple Cider Vinegar. I am not sure why so little, but I love the benefits of ACV and I had plenty on hand so I used more. It helps leech the nutrients out of the bone, and I wanted to get the most out of it. It did not make the completed broth taste of vinegar in the least. You can also add lemons; they serve the same function plus add a little flavor. Some people skim the foam a few times early in cooking, or skim the fats off after cooking, especially if they are concerned about the quality of meat. Mine didn't seem to have a lot of either foam or fat, so I didn't bother with it.
Made this? Show it off!Follow @lowcarbzen & tag it #lczen.

Random tips: I’ve heard people say they do more than one batch with the same bones. I think if you cook it long enough, there won’t be much of the bones left to do additional batches. I found using a Nut-Milk Bag PERFECT for straining. I also prefer ice cube trays to jars for freezing because if it expands too much, your jars can shatter in the freezer. Oops! A bone-brothed freezer does not a magically easy slow cooker bone broth success make!

Update, 10/15: From my experimentation, I’ve learned that allowing the broth to cool some when my slow cooker times out overnight really helps the gel factor. I’ve been cooking this two days at a time, adding veggies the second day and allowing the pot to go off for a few hours at night produces an awesome gel.

Nutritionals not provided because it’s going to depend entirely on what ingredients you use, but we’re talking a small number of carbs related to whatever veggies you use. And since you don’t eat the actual vegetables, I’m confident it will be minimal.

Have you made an easy slow cooker bone broth? How did yours work out?

New Atkins for a New You suggests that fatigue, lightheadedness, constipation, and leg cramps indicate a need for sodium and balancing electrolytes when first transitioning to a low carb regime. The diet initially has a diuretic effect. A cup of broth twice a day is one of the suggested remedies.

The Day After Thanksgiving…