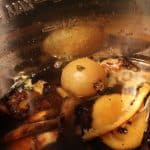 Bone broth used to take for-ev-er to make in the slow cooker. But if you've got an Instant Pot? No more! Here's a super easy, 2-hour Instant Pot Bone Broth How-to for you. Full recipe from Low Carb Zen here => https://www.lowcarbzen.com/low-carb-recipes/instant-pot/2-hour-instant-pot-bone-broth/

You can use less Apple Cider Vinegar if you want. Or if you don't have any on hand, try adding some lemon juice instead. You won't notice the taste in the finished broth, but it helps leech the good stuff out of the bones. Some people suggest using filtered water. I don't know why exactly, but I do have a filtering pitcher I normally use. The water does taste better, so there's that. If you separate bones by type, the broth flavor will reflect that (e.g. beef broth, chicken broth, turkey broth). Unroasted bones make a lighter broth than roasted. I usually mix and match bones unless we're talking turkey. The turkey bones get their own broth in my house. Mmmm, turkey broth!