Instant Pot Bone broth is new to me. Back in the before-before time, when I didn’t have an instant pot, I experimented mightily to figure out how to make slow cooker bone broth in two days. I even called it “Magically Easy.” It was pretty easy, other than the wait.

Now that I have my Instant Pot? Well, the difference is just ridiculous. I can do the same thing it took me days to accomplish in a couple hours now.

Bone broth is great for cooking, in place of stock or even water. Sometimes people sip it like soup, especially when they’re feeling under the weather. I sometimes use it as the liquid required for my Instant Pot cooking. It’s very handy for adding a little extra nutrition and flavor to lots of dishes.

The bones are full of great vitamins and minerals. The gelling of the broth lets you know you’re getting lots of the good stuff out of the bones. And Instant Pot bone broth gels up great!

In fact, if you make a lot of broth, the ease and speed of Insta-potting it might be enough to justify the pot purchase all by itself. This is without me even getting started on the amazingness of homemade yogurt! (Believe you me, you don’t want to get me started! I am obsessed with that stuff. Even I am getting sick of hearing how much I love it.)

Now, when you read up on bone broth, you’ll see lots of people tell you that you must source some kind of specific and special bones, from emotionally well-adjusted, free-range, grass-fed animals who sipped on thrice-purified, organic cucumber water while listening to classical music under a waxing moon.

Or something like that. To be honest, I kind of tune all that stuff out.

Do what you feel good about, okay? Personally, I save the bones from our normal (non-organic) dinners. I also save scraps of veggies that are not suitable for cooking or past their prime. I just stuff it all into baggies and toss in the freezer. When I get enough ingredients assembled, I whip up a batch of 2-hour instant pot bone broth. Easy, peasy.

I’m not including nutritional information because I have no idea what exact scraps you’ll be using. But we’re talking mostly bone-and-veggie-infused water, you know? So the carbs are going to be negligible–especially since you’ll strain out the vegetables at the end. So count it if you like, as you like.

Don’t have an Instant Pot? Check out my Slow Cooker Broth. 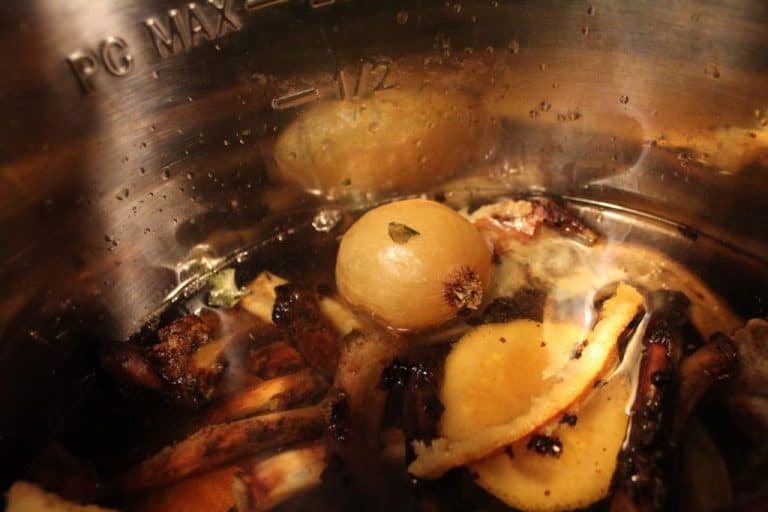 You can use less Apple Cider Vinegar if you want. Or if you don't have any on hand, try adding some lemon juice instead. You won't notice the taste in the finished broth, but it helps leech the good stuff out of the bones. Some people suggest using filtered water. I don't know why exactly, but I do have a filtering pitcher I normally use. The water does taste better, so there's that. If you separate bones by type, the broth flavor will reflect that (e.g. beef broth, chicken broth, turkey broth). Unroasted bones make a lighter broth than roasted. I usually mix and match bones unless we're talking turkey. The turkey bones get their own broth in my house. Mmmm, turkey broth!

I often pull out an Instant Pot bone broth cube or two to toss in the pan when cooking meat to add a little extra flavor, or use them as a base for sauces. Once you have them on hand, you’ll think of all kinds of uses for them.

I really love knowing I’m getting a healthy addition to my recipes while making good use of food that would otherwise go to waste. Definitely a win all the way around.

Do you make broth? How do you use yours?